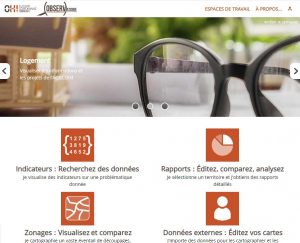 The intermunicipality of Clisson, in Loire-Atlantique, had been operating a territorial observatory since 2011. At that time, it was conducting its project with Géoclip O3, covering a "small" territory, made up of a dozen municipalities (let's mean "small" in terms of surface area;).

Since then, in 2017, a merger has taken place with the neighbouring intermunicipality, giving rise to the agglomeration community of Clisson Sèvre Maine. At the same time, the new Agglomeration has chosen to upgrade its observatory to Géoclip Air. The latter has just been put online here: http://observatoire.clissonsevremaine.fr. As before, the extent of the area under consideration is not limited to the borders of the Agglomeration, but also includes the Loire-Atlantique Department and the former Pays de la Loire Region.