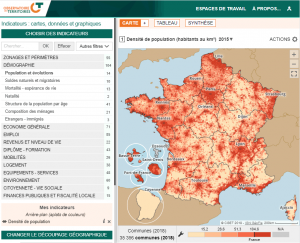 Observatory of territories - The French national Agency for Territorial Cohesion

The Observatory of territories collects, analyses and publishes data on territorial dynamics and disparities. It is managed by the national Agency for territorial cohesion. Since its inception 15 years ago, it has offered an interactive mapping tool. The version that has just been released is the third, it is still based on Géoclip, now in its Air version.

It is a real pleasure to rediscover the richness of this multi-thematic tool, giving access to nearly 600 indicators, with the new Géoclip Air interface.  The observatory gives a large place to the Reports workspace. These portraits of territories address a dozen issues: urban/rural contrast, population growth, population aging, access to the labour market, housing supply, access to health services, to name a few.

And as always with Géoclip, everything obtained in the observatory can be exported in different formats, to facilitate reuse and sharing. Is there a more pedagogical tool to increase the level of knowledge?

“Your territories on demand” – The Urban Planning Agency of...
Scroll to top