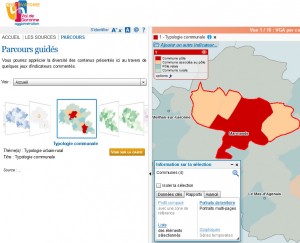 Val de Garonne Agglomération is an intermunicipal establishment that contains 43 municipalities, around the city of Marmande, in Lot-et-Garonne. It has just set up a socioeconomic territorial observatory, built with Géoclip Serveur.

This observatory makes it possible to consult and to map statistical data on various socioeconomic themes: population, households, housing, employment. It is interested not only in the municipalities of the urban area, but also in the other intermunicipal establishments of the department, to facilitate comparisons between territories.